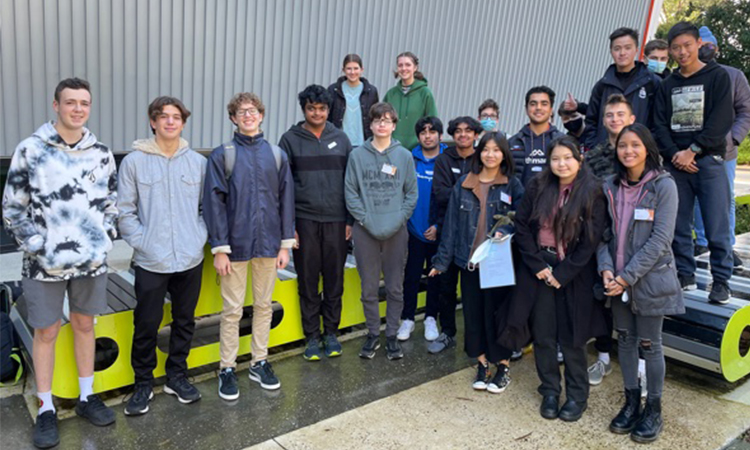 Matilda Hardwick participated in 5 days of Engineering Work Experience at the Deakin University in the last week of Term 2.

Here is her summary of the experience:

On Monday morning, our group of 23 year 10’s participating in Deakin’s work experience program met for an introduction to the program. We were given a brief overview of the week ahead and we talked about the OH&S involved. A recent graduate from Deakin’s engineering courses came and spoke to us about his experiences at Deakin and what he got out of studying engineering there. He also spoke to us about where his degree has led him how he got there. After all the introductions we were given a tour of the building/s that we were going to be working in, specifically looking at the mechatronics labs, civil engineering labs, 3D printing labs and the environmental labs. After this we were given the overview for our main project (being the creation of a wind turbine, mostly focussed on the blades, which produces the highest voltage/watts) that we would be carrying out over the next week.

Working in small groups we began initial brainstorming and basic modelling of our project and began preliminary experiments. At this point we tested our preliminary experiments using a wind tunnel to see what was most effective and continued from there also learning how to use the program Fusion360 which is used for creating 3D models. We were the given a tour of Deakin’s VR lab and got to try out 3 very fun and interesting programs that they have made up simulating many different experiences.

On the second morning at work experience we got started right away at continuing our learning of the program Fusion360. After completing a design together, we then went to our groups and began working on a model for our own turbine project. Our second activity for the day included a trip to the civil engineering lab where we learnt heaps from the people working in there. We completed a practical activity, trying to make the best foundation for some weights using only the resources provided, being clay, sand, and water. These were used to represent the soil and ground beneath many structures that civil engineers work with on a daily basis. For this week’s purpose we mainly focussed on supports and foundations effective for the large wind turbines. We were then able to walk to Deakin’s solar farm where we learnt many interesting things from their specialists like its capabilities and basics on how it works. We then got the chance to look in their control room for the solar farm where we could look at the computers and data that collects and operates the farm.

On the third day of our work experience week, we spent the morning working on our project finalizing designs, redesigning, testing laser cutting parts and 3D printing parts. In smaller groups throughout the day, we got the chance to look at a model size generator for a wind turbine. This machine was made for training at Deakin as it is made to have a fault occur when in use and the goal is to identify the fault. We had a look at all the parts of the machine and how they worked to generate power. We later got a tour of the HV labs, which is the High Voltage labs. In these labs we learnt about the effect of lightening on a wind turbine. The HV lab had an area where we could stand – behind a large metal cage which we learnt would stop the lightening coming closer – and watch as a demonstration was performed. We put a small rod in the room, demonstrating the turbine and tested to see if the lightening would hit the rode more than anything else. Being the tallest object in the room, it generally did. We then got shown what people at Deakin had worked on, being the effect of sound on the lightening and using them together.

Day 4 of the week was mainly dedicated to finishing our project and presenting. We collected any parts that had been 3D printed though the night and started constructing the turbine. Most groups ended up making two models as many of the first ones needed revising. We were then given the task of creating a presentation to sell our design to a panel of contractors – being the staff. We were also able to try and design an effective foundation for our design. We modelled it on Fusion360 and then laser cut the parts. We created a small experiment to see whose foundation would hold the most weight when pulled on sideways. In the experiment we put our foundation in a mix of sand and clay as a representation of the soil and used nails to secure it and then attached weights that pulled on the side of it and measured how much it held. On Thursday we also completed tests of the wind turbine model in the wind turbine for final results.

On Friday we got the chance to look at the future plans for sustainability at Deakin. This consisted of their plans for the next 30 years split into 5-year intervals. We also got shown how they came up with their plan and what steps they had taken to establish what needed to be done. We were shown their plans for how they will incorporate the power generated from their solar farm efficiently into the campus and using nature and canopied trees to be more environmentally friendly keeping the campus cooler and protected. We also had a presentation from Kate who gave us tips on resumes and job interviews for the future focussing on what questions to ask, how to get their attention and what is necessary for every interview. Both of these presentations were very informative and engaging and we learnt heaps throughout the day.

I had a great time and am super grateful for the chance to participate in this program.