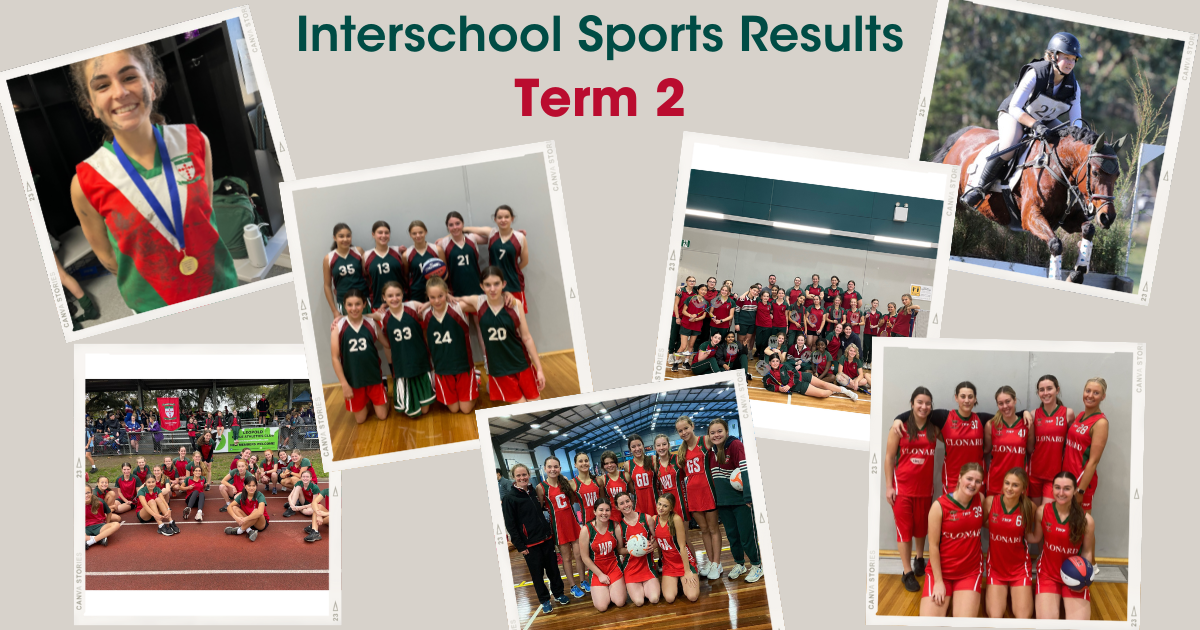 The Badminton team had a very early start on Wednesday 4 May to travel to MSAC to compete in the Division 3 Badminton. Competing against other all girl Catholic schools, our Junior, Intermediate and Senior teams had a very competitive day with great results!
Our Senior team was commended by others in the competition for their sportsmanship and kindness shown when competing against teams who were just learning.
Congratulations to the Senior Team who won the competition.

Well done to our Intermediate team who made it to the finals!
And an awesome effort by our junior students who were playing badminton for the first time

On Tuesday 10 May our Junior, Intermediate and Senior Basketball teams travelled to MSAC to compete in Division 2 against other all Girl Catholic schools.
After moving up a division our students had a much more challenging competition this year. As always, they wore Clonard uniform with pride and represented the school in a very sportsmanlike manor. We were also very lucky to be able to bring two intermediate basketball teams to the competition this year.
Junior A – 4th Place
Junior B – 5th Place
Inter A – 5th Place
Inter B – 6th Place
Seniors – 5th Place

An amazing effort by our Athletics team in 2022. On Friday 13 May they travelled to Landy Field to compete against other Geelong Independent schools in various track and field events.
The collective effort of the Junior and Senior team allowed us to place 3rd in both these divisions.
There also some outstanding individual results which included records broken!
Outstanding results below:

After some very high-quality trials, the top 20 Year 9 and 10 students were selected to represent Clonard at the GISSA Inters Netball competition. Held on Monday 23 May at Geelong Sports Hub both teams played some high-quality netball. Coached by Meagan Canaway and Abbey Blackley the teams placed:

Senior Netball team comprising of dedicated Year 11 and 12 students competed against other Geelong independent schools at Geelong Sports Hub on Tuesday 31 May.
It was a fantastic competition with many close games. Overall, our Senior team placed 3rd in this competition. Pippa Dean was the MVP for the day.
Credit to our coaches Meagan Canaway and Abbey Blackley for taking the team on the day.

After two years of interrupted sport, it was great to see our Year 9 and 10 students get out on the field against other Geelong independent schools. The competition was held at Queens Park on Tuesday 7 June.
At the end of the day, it came down to the final between Clonard and Sacred Heart. In a tough hit out Clonard was victorious breaking Sacred Hearts 12-year streak in this competition.
The team gets to progress to the next round competing against Geelong College in a semi-final for the Herald Sun Shield.
Congratulations to coaches Bridget Taylor and Matthew Wapling for supporting the students to the win.

In the same week our Year 7 and 8 students travelled to South Barwon reserve to also take on Geelong independent schools in the AFL. We had many enthusiastic students who signed up and with the expert guidance of Lance Houlihan and Abbey Blackley they Junior team was also able to defeat Sacred Heart in the grand Final with a massive score of 52 – 10.

Our final carnival day for the term was held this week on Wednesday 22 June. A group of dedicated Year 9, 8 and 7 students travelled to Parkville to play in the SCSA Hockey. Competing against Ave Maria and Saint Aloysius they played a competitive round robin with a grand final show down against Ave Maria.
After a tight match, the final decision was made through a penalty shoot out where Clonard managed to snatch the win!

Our Year 7 and 8 students have the wonderful opportunity to participate in a 6-week round robin against other Geelong Independent schools. The competition is designed to encourage participation in sport and develop social connections against other schools.

The sports the students chose from this term were netball and soccer.
It was great to have so many students involved, not only developing their skills in the sport but also developing their organisational skills to be involved.
Credit also goes to the many staff members that made this competition possible for the students each week.

Clonard was well represented in Equestrian events during Term 2, with some outstanding results.

Congratulations to the following students who competed at the Tintern Grammar Interschools Horse Trials held in May: