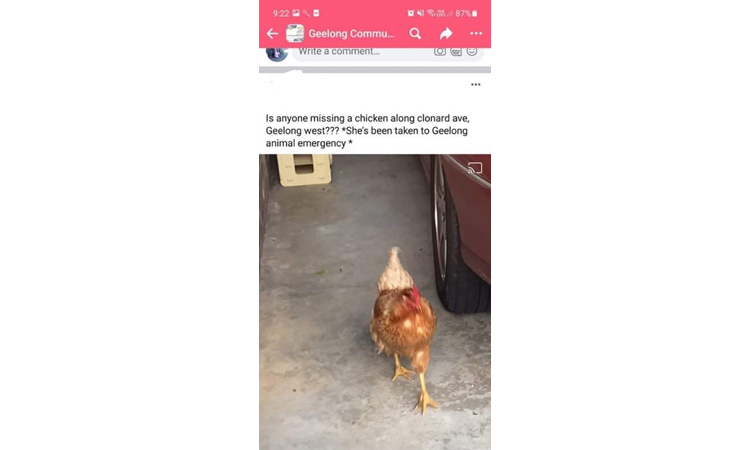 It was a normal Wednesday morning in the garden program. The sky outside was cloudy with the sun peeking though. Our 6 Isa Brown chickens had already been let out of the chicken coop early by Eden. We have one rebel chook called Charlene. She’s an explorer who jumps the fence. She scratches in the raised beds and digs up our plants looking for bugs to eat. The other chooks are happy to stay in their section.

We were discussing what we were going to do for the day when Mrs Bentley interrupted us. She received a text message from a friend asking if we had all our chickens. There was photo proof of one chicken who had been seen roaming the streets in Geelong West.

Immediately we thought of Charlene, our rebel chook. We wondered if the escapee chook might be Charlene.

We went outside to count how many chickens were there. We searched everywhere in the garden. We looked up and down the pathways and behind the raised garden beds, between the greenhouse and the fence. We only counted 5 chickens and realised we were missing one. We were starting to feel a little worried. We were afraid that the missing chicken was in Geelong West. We decided to search the garden again.

We were all in the Secret Garden which is behind the Chapel. We looked in the ‘Chook-In’ where the chickens lay their eggs and sleep. The next minute we discovered a chicken in the nesting box! After counting one more time, we saw that we had all 6 chickens. What a relief. We felt happy and overjoyed. It was Charlene laying an egg in the nesting box. We were wrong, she wasn’t the runaway chicken after all. We messaged Mrs Bentley to tell her we had found the missing chicken. We learnt to always check everywhere in the garden and never assume our rebel chook is always up to mischief.